The duo M2M was a Norwegian pop music duo composed of two girls - Marion Elise Raven and Marit Elisabeth Larsen. The duo released three albums under Atlantic Records and Warner Music. They produced 2 albums, Shades of Purple and The Big Room
and a "greatest hits" was released after M2M disbanded, under the
decision of their record label. They have sold over 12 million albums
and singles in the world. The girls had known each other since they
were five, before forming the group in the mid-1990s. 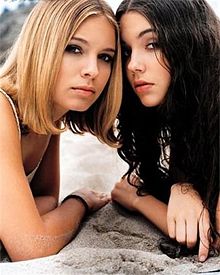 Background informationOriginInstrument(s)Years activeLabel(s)Former membersThe group debuted with their first single, "Don't Say You Love Me", in 1999, which was featured on the soundtrack of Pokémon: The First Movie.The movie helped the song to reach success worldwide and the duo released their debut album, Shades of Purple, in 2000, which debuted at number one in Norway and several Asian countries and in the Top Forty in most other countries. In September that year, the duo toured with Hanson, performing as the boys' opening act. Earlier in the year, they performed a concert special at Disneyland, aired on April 29th, 2002 under the name "M2M and BBMak in Concert", performing six songs with breaks in between of them walking around the park and seeing the sites.
Four more singles off the album were released, "Mirror Mirror", "The
Day You Went Away", "Pretty Boy" and "Everything You Do". Their trilingualism made them popular in Asia as they released several songs sung in Mandarin such as "Pretty Boy". However, they did not record a version of their hit "The Day You Went Away", but Taiwanese singer Cyndi Wang recorded her own version instead.
In 2002, the duo returned with a more mature, less pop-oriented sound with their second album, The Big Room.
In two years, their voices had changed, especially Marion's. The first
single off the album was "Everything" followed by "What You Do About
Me." They did not release a third single, even though "Don't" was
released to U.S. and Latin America's radio stations and "Wanna Be Where
You Are" was released in the Philippines. The promotion for their
second record included TV appearances that year, such as a spot on the
WB's,appearing in the 100th episode of the show towards the end if it's
forth year. That year, they also took part in the Pantene Pro-Voice
concert series that aired on the now defunct MuchMusic USA.While on tour with Jewel,M2M was dropped by Atlantic Records, who cited a lack of record sales, although the album did do well in Norway, Asia, and Australia.
Although M2M was the most popular Norway female band, the most
successful, and the youngest artist to get an international career
after AHA, the duo eventually split in September of that year. The two
are currently performing as solo artists, now going by their own names.

M2M - The day you went away